Since returning from my trip to France and Spain I’ve been musing over some of the things I noticed. I must admit I’ve become slightly obsessed with the cultural differences between us and our European friends. In particular, the way their deep rooted, cultural relationship with food enables them to live a little more healthily and sustainably. Being more aware of these differences has changed (or maybe just reinforced) the way I think about our food system in the UK and is influencing what I buy and the way I eat.

I’m in awe of how connected people in France and Spain are to the land around them. Growing one’s own food and buying direct from local producers at vibrant food markets is a normal part of everyday life. Before working on farms I felt like I was aware of the basic food shop dos and don’ts: avoid intensively farmed meat, buy free range organic eggs, be aware of seasons and food miles etc.      I didn’t always stick to my rules but I now think that’s partly because I hadn’t fully grasped how brilliant eating local, seasonal food really is. There really is no comparison between the insanely delicious taste of a tomato plucked from the vine in high summer with the all year-round supply of bland, thick skinned, chemically ripened supermarket offerings. I felt a real sadness when we harvested the last tomato at the end of the summer. Not a tomato in sight till the end of May? Shock horror! But, thanks to bottling during the glut, we enjoyed deeply rich and sunny tomato sauce well into the depths of winter. Now that I’m back in the UK, my habits have changed. I’m not attracted to the piles of tomatoes on offer and find myself striding over to the roots and the brassicas when I want salad. I’d rather not wait until good fresh tomatoes come back in late May but it doesn’t feel like much of a sacrifice anymore. 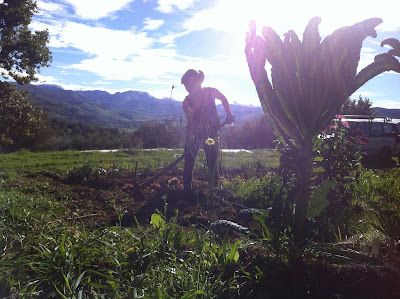 The connection to where food comes from was particularly strong in the village of Sandonaña in Cantabria where we had the privilege of living for a month. Cantabria is steeped in its dairy farming traditions and is the basis for their incredible fresh cheeses like Queso Nata, and devilishly delicious, yet simple deserts like Quesada Pasiega and Sobao Pasiego. The recipes have been passed down for generations unchanged. Sandonaña is a village where pretty much everyone not only grows their own vegetables but also owns chickens, pigs and even small herds of dairy cows! They wouldn’t consider themselves    as farmers but also wouldn’t think twice about planting 700 onion sets for themselves. Normal people grow and rear their own food and local producers competed with, and were even embraced by, large supermarkets. 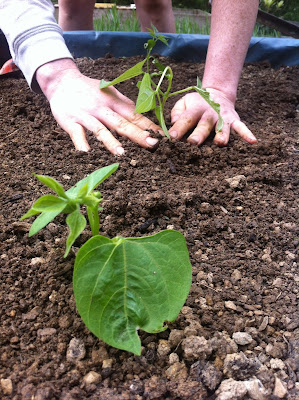 There’s no doubt that eating in these ways supports a more localised food system and is one deeply engrained in both French and Spanish culture. I’m not saying that either are perfect but I have been inspired by the way the far end of the supply chain is often within walking distance. I also can’t help thinking that their communities are more resilient in the face of a changing economy and climate.

For time poor, city folk without the luxury of a garden, this can seem a bit pie in the sky. But help is available to prove the contrary. Seasons is a nifty app that acts as a harvest calendar that you can carry in your pocket. It tells us when produce is at its best and even gives you lists of local farmers markets.

The incredible Food Assembly is a pioneering community network who make it easier for us to get hold of local produce. It enables growers and farmers to list a changeable array of seasonal offerings and connects them with customers who can order online and collect face to face after working hours.

There are so many others too, so I’ll endeavour to keep sharing the wonderful things as I find them. Then we can all be satisfied in knowing what we’re eating and exactly where in the world it has come from.

Rhiannon Hill
The personal blog of Rhiannon Hill, who likes to draw, grow stuff and combine the two.